Meta is shutting down a video speed-dating service it had tested over a good part of last year, the company informed the service’s users via a recent email. Last April, the company formerly known as Facebook confirmed it was testing a new dating service called Sparked, which was developed by its in-house incubator, the NPE team. Unlike modern dating apps where users swipe on profiles to generate matches, Sparked’s premise was to bring the serendipity associated with in-person speed dating to an online service.

With Sparked, daters would cycle through a series of short “video dates” during a preplanned event with other locals in their area. The team had tested the service in select markets, including Chicago, and had also hosted several “global” date nights throughout the year, as well as dedicated events for LGBTQ users or other demographics, like certain age groups. 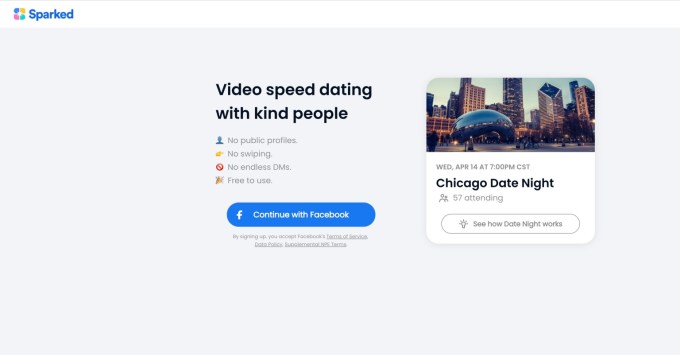 Initially, Sparked users would chat in short, four-minute video dates, which they could then follow up with a 10-minute date, if all went well. They could also choose to share their contact information with a match, like their phone number, email, or Instagram handle.

Meta, at the time, described Sparked as “a small, external beta” test designed to generate insights about how video dating could work.

However, Sparked last summer began experimenting with a different sort of online dating that didn’t include video chat: audio dating. The service hosted several “audio only” date nights where users could chat with one another, but not appear on video. Not coincidentally, Facebook’s larger dating service, Facebook Dating, soon thereafter launched a new feature called Audio Dates which similarly gave users a way to start an audio chat with their match.

Now Sparked is closing up shop. The company informed its testers via email that the service will officially close on Jan. 20, 2022.

“We started building Sparked in late 2020 to help people find love through an experience rooted in kindness. Since then, thanks to regular input and feedback from you, we improved where we could, learned a ton, and made connections between people,” the email read. “Like many good ideas, some take off and others, like Sparked, must come to an end.”

The email seems to imply Sparked is not among the “many good ideas” that “take off.” In other words, it didn’t find traction.

Reached for comment, a Meta spokesperson didn’t have anything more to add beyond what had already been shared in the email to Sparked users.

The company is giving users a way to download their information from Sparked’s website before the final shutdown. After Jan. 20, however, all user accounts will be deleted.

It’s not surprising that Meta is closing down this experiment. Few of the NPE team’s projects have found a permanent home at Meta as standalone apps, despite a wide smattering of tests that have included things like calling apps, meme-makers, and even variations on popular social apps like TikTok, Twitter, and Clubhouse. Currently, only three NPE projects are still live on the U.S. App Store: BARS, a TikTok-like app focused on rap music; Collab, a collaborative music-making app; and Tuned, an app for couples.

Meanwhile, Facebook’s broader efforts in dating haven’t proven all that successful when compared with incumbents. An analysis of Meta’s own Facebook Dating ads by The Verge last spring indicated Facebook was struggling to convert its millions of users in various cities to Facebook Dating users — even though the feature is available directly in the Facebook app itself.

And Meta can’t necessarily blame the pandemic for this. Top dating apps saw surges of usage during the pandemic as people embraced virtual dating, which continued into 2021.

In addition to not likely meeting the bar for continued investment, Sparked also doesn’t quite fit into the NPE team’s new vision as an organization focused more on emerging markets, not just new consumer social experiences.

The group set up offices in Lagos, Nigeria, and is staffing another in Asia. It’s also planning to look externally for new ideas, including by making seed-stage investments in small, entrepreneurial teams, it recently said.