Skydio’s self-flying drone is getting a host of new software, hardware and services updates to ring in the new year.

The Bay Areas-based drone company is revamping their flagship drone with a host of features designed around usability and range, along with a major software update focused on bringing more control to users without forcing them to take manual control of the drone. The team is also delivering a new service plan called Skydio Care designed to give drone owners a protection plan that supplements their existing warranty but allows for rapid replacement of accidentally damaged devices.

Over the past several years, Skydio has been in an interesting position as a young American drone company with both consumer and enterprise clients. Its latest device — an updated version of its Skydio 2 drone called the Skydio 2+ — aims to serve both customers. The big update here increased flight range thanks to 5Ghz Wifi radio and two pop-up antennas which extend maximum range from 3.5 km to 6 km. The 2+ also sports a higher-density battery pack which adds a few minutes to its maximum flight time, now 27 minutes.

As has always been the case, the star of this drone is its computer vision-aided intelligence which allows the drone to pilot itself using a series of onboard cameras. The company is expanding its ambitions with a new software feature called KeyFrame, which will be available for both the Skydio 2+ and original Skydio 2. 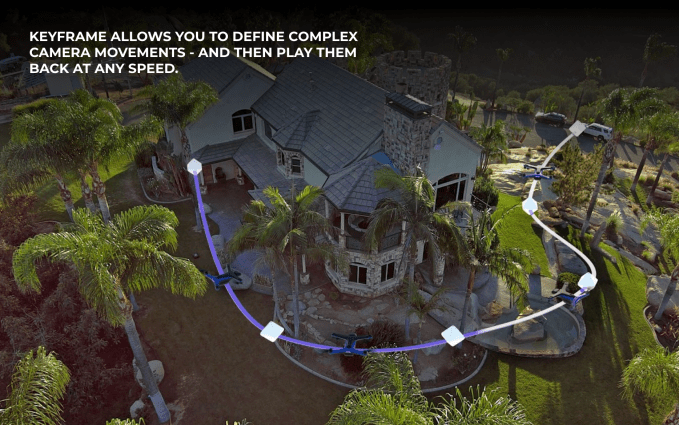 The AI-powered feature allows for more cinematic capture by giving the user the power to define the individual shots they want to capture with the device’s app but then allowing the Skydio drone to handle the trouble of moving between those shots while creating a sweeping video that nails all of the key points of interest.

The software feature is one of the most powerful yet to come to the device and may help onboard enterprise clients who are still skittish to play around with the self-flying drones software. Skydio has another effort to entice the nervous: a new service plan called Skydio Plus which brings flat rate accidental damage repair to the device. Users will be able to choose 1-year or 2-year support plans for $149 and $249 respectively which allow users to replace broken or lost drones for flat rates. The first replacement of a damaged drone will cost just $150 for subscribers while a lost drone will require users to pay up $550 to replace it under the extended warranty plan.