Welcome back to This Week in Apps, the weekly TechCrunch series that recaps the latest in mobile OS news, mobile applications and the overall app economy.

The app industry continues to grow, with a record number of downloads and consumer spending across both the iOS and Google Play stores combined in 2021, according to the latest year-end reports. App Annie said global spending across iOS and Google Play is up to $135 billion in 2021, and that figure will likely be higher when its annual report, including third-party app stores in China, is released next year. Consumers also downloaded 10 billion more apps this year than in 2020, reaching nearly 140 billion in new installs, it found.

Apps aren’t just a way to pass idle hours — they’re also a big business. In 2019, mobile-first companies had a combined $544 billion valuation, 6.5x higher than those without a mobile focus. In 2020, investors poured $73 billion in capital into mobile companies — a figure that was up 27% year-over-year.

This Week in Apps offers a way to keep up with this fast-moving industry in one place, with the latest from the world of apps, including news, updates, startup fundings, mergers and acquisitions, and suggestions about new apps and games to try, too.

Do you want This Week in Apps in your inbox every Saturday? Sign up here: techcrunch.com/newsletters

Apps have been accused of quietly snooping on their users for some time. They collect data and reshare it with advertisers and other third parties, often without users’ truly informed consent. Now the tables are turned in a sense, as users will finally be able to snoop on their apps, thanks to Apple’s new App Privacy Report feature, now available in iOS 15.2 and iPadOS 15.2. This app transparency feature lets an iOS user see what their apps are actually doing — including which apps are accessing the data and the sensors on your phone, as well as where that data is being shared. The latter is revealed through the feature’s ability to report with which third-party websites an app is communicating. Some of those may be for analytics purposes, but others may be adtech sites.

To use the feature, you’ll head to Settings > Privacy > App Privacy Report then switch it on. Over time, you’ll be able to see how apps accessed your data over the past seven days, complete with timestamps for its every action. While Apple should be applauded for making this information more transparent, there’s some concern that the report will leave users feeling less empowered, rather than more empowered. Sure, a favorite app may be contacting some odd-sounding domain, but what data exactly was shared? Would the user be okay with that data sharing if it were explained? If they’re not okay with it, what are they supposed to do to stop it, other than just uninstalling the app?

Apple seems to be betting on the fact that simply making this information public could push the app industry toward better behavior that’s more respectful of user privacy. But just like most users never read those long user agreements when installing software in the first place, it’s not clear to what extent this new feature will be adopted by mainstream users.

Google this week offered more details about the new features and updates that will be available when the first devices running Android 12 (Go Edition) are launched in 2022. Designed for low-end smartphones, apps on Go Edition will launch up to 30% faster and with smoother animation, Google says — that means they’ll open instantly, instead of presenting users with a blank screen. The new SplashScreen API will help Android developers provide this consistently smooth experience when their users launch their apps.

The updated OS will also automatically save battery life and storage by hibernating apps that haven’t been used for extended periods of time. The Files Go app, meanwhile, allows users to recover files within 30 days so users can safely delete files when they need to free up space.

Other new features include guest profiles on the lock screen; offline sharing with nearby devices via Nearby Share; a privacy dashboard that shows app activity, permissions and access to sensors; a privacy indicator that alerts you when apps are using your mic or camera; the ability to select approximate location instead of precise location when sharing your information with apps; plus the ability to listen to the news, and translate on-screen content into your language from the screen where you find your recent apps.

Some of the new features were brought over from the main Android 12 OS to Go Edition, while others were designed for the needs of low-end smartphone users — a large market. Google says more than 200 million people actively use an Android (Go Edition) phone. 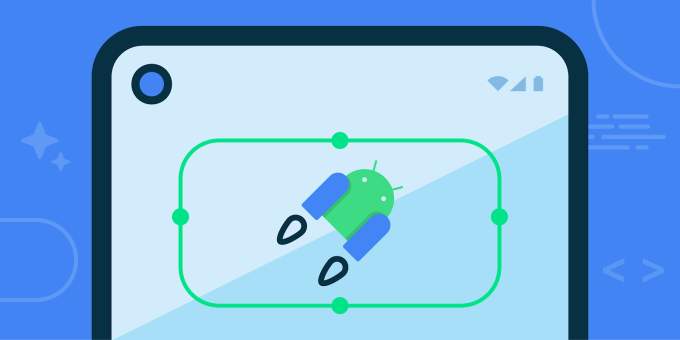 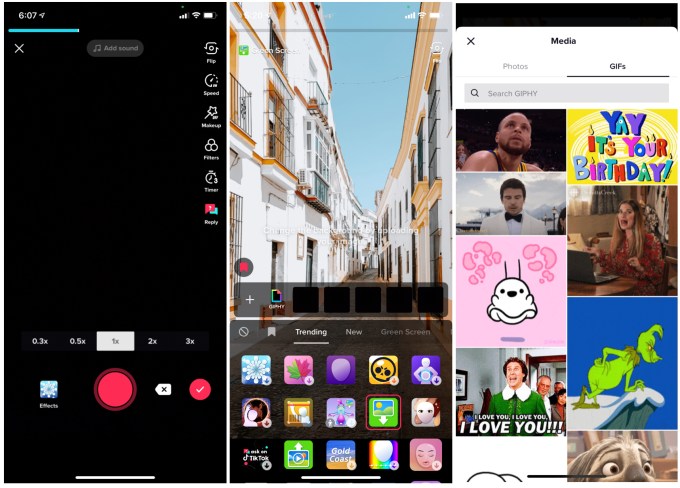 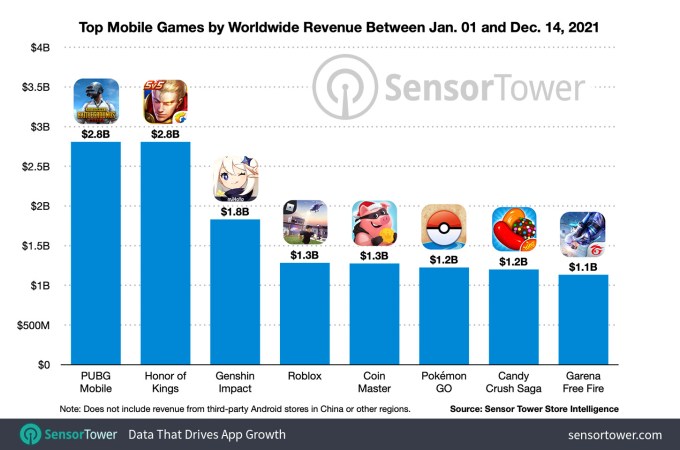 Funding and M&A (and IPOs)

Beauty-focused livestreaming and shopping app Supergreat raised $20 million in a round led by Greenoaks and joined by Shopify and existing investors, including Benchmark, Thrive Capital, TQ Ventures, Shrug Capital and Third Kind. This is Shopify’s first investment in the creator economy, and follows a beta test where Supergreat offered one-click integration with businesses on Shopify.

Reddit filed to go public. The company confidentially filed paperwork for an eventual public offering, but didn’t disclose the total number of shares to be offered or valuation. In August, the company raised $410 million led by Fidelity, valuing it at $10 billion. It had plans to close out the round, a Series F, at $700 million at the time.

Indian social networking app ShareChat raised $266 million in new funding from U.S.-based Alkeon Capital and existing investors, driving its valuation to $3.7 billion, up from $3 billion in July. This is ShareChat’s third funding round this year. Other investors include Singapore’s Temasek Holdings and Moore Strategic Ventures.

Social media app for investors Stocktwits raised $30 million in a round led by Alameda Research Ventures. The raise follows a year of meme stock craziness that pushed the app’s user base up by 50% to reach 6 million; 1 million of those people are active on a monthly basis. The company is now valued at $210 million.

E-commerce marketplace The List raised $3.5 million in seed funding from American Designer, Rachel Zoe and others. The company also launched its app offering access to luxury brands and retailers through a personalized shopping experience that includes livestreams.

Subscription data platform for apps Qonversion raised $2 million in seed funding led by Visionaries Club and Flashpoint Venture Capital. The company will use the funds to set up its HQ in London and expand teams across the U.S., Europe and APAC. The company has 1,000 customers.

Game streaming site and app Medal.tv, which lets creators clip and share gaming moments, raised $60 million in funding as it reached 2 million clips shared per day. The funding includes a $45 million round led by Omers Ventuers, then a $15 million round from Makers Fund, Horizon Ventures, Dune Ventures and others.

U.K.-based social audio app Wisdom raised ~$2 million in a seed round led by First Round Capital. The app, which launched in October, connects people looking for mentorship and advice.

LA-based Papaya raised $50 million in Series B funding to give people a new way to pay bills by snapping a photo of their bill then submitting their payment through the app. The round was led by Bessemer Venture Partners, and brings the company’s total raise to $65 million since its 2016 founding.

CreditBook, a bookkeeping app for small merchants, raised $11 million in pre-Series A funding led by Tiger Global. This is Tiger Global’s first investment in a Pakistan-based startup.

Spotify acquired the podcast tech company Whooshkaa, which turns radio broadcasts into on-demand audio. The company plans to integrate this technology into Megaphone, as Spotify already offers the other tools Whooshkaa had provided like hosting, distribution and ads. 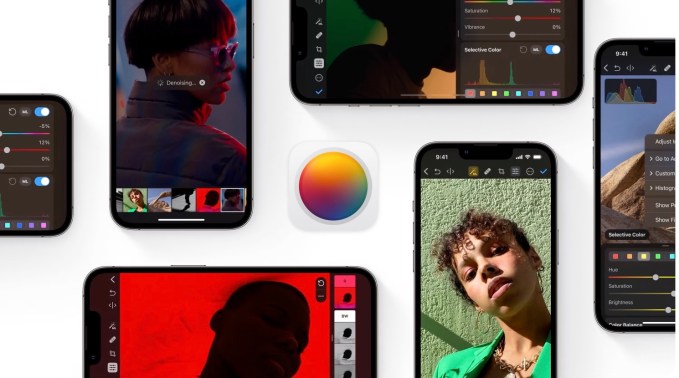 The popular photo-editing app Pixelmator has now brought its powerful tools to the iPhone with the launch of Pixelmator Photo for iPhone. The new app offers users over 30 “desktop-class” color adjustment tools, based on those first developed for Pixelmator Pro for the Mac. It also supports over 600 RAW formats, including Apple’s new ProRAW format. Other tools leverage machine learning capabilities, like an automatic photo enhancement tool that, with a tap, lets you improve a photo to make it look more professional. You can also enhance photos with AI, remove camera noise, automatically crop photos and more. The new app is a universal app for both iPad and iPhone. If you already owned the iPad version, then you will get the iPhone version automatically. At launch, it’s 50% off at $3.99. 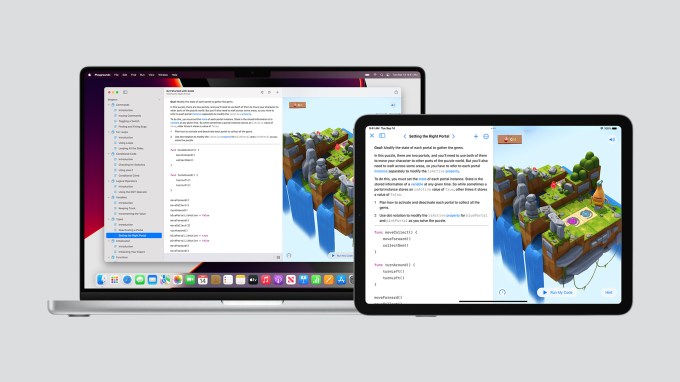 Apple this week released the latest version of its Swift Playgrounds app, which now lets users build iPhone and iPad apps with SwiftUI right on their iPad. This feature requires iPadOS 15.2 or later. As you make updates to your app, an App Preview feature lets you see the changes as they’re applied and a full-screen preview lets you view your app edge-to-edge. When you’re finished, built in App Store Connect integration lets you upload your finished app to the App Store. The app also includes inline code suggestions, tools to move projects from Xcode and back, project-wide search results, a Snippets Library with hundreds of SwiftUI controls, symbols and colors, and more.  A new open project format based on Swift packages can also be opened and edited in Swift Playgrounds for iPad, as well as within Xcode on Mac, Apple noted. 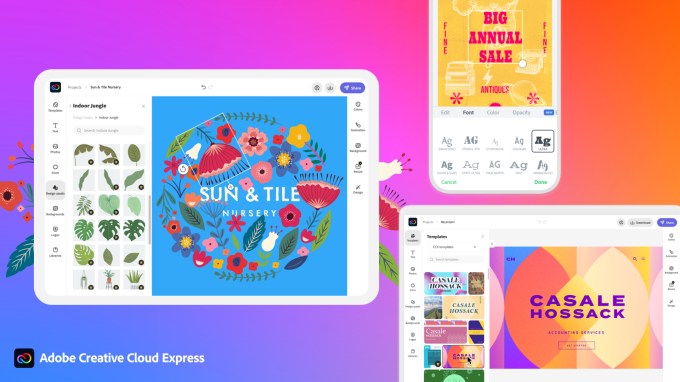 Adobe this week launched a new web and mobile app — and Canva rival — called Creative Cloud Express that combines features from its Creative Cloud Suite and Acrobat PDF tools into a single application. The app, which replaces Adobe Spark, aims to help users quickly create anything — like  social media posts, posters, videos and more using templates, stock images and other assets. The app will offer a free tier and a $9.99 per month version with additional capabilities and an expanded library of more complex templates. Free users can access 1 million images and other assets, while premium users get access to 175 million Adobe Stock photos, 20,000 fonts and access to Photoshop Express and Premiere Rush.